What time is it?…Hurricane Time! 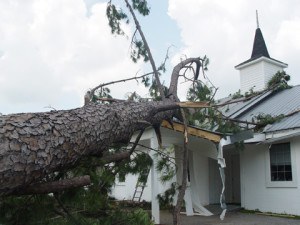 WPLG/Channel 10, Max Mayfield’s Hurricane Blog: A long-time customer of One Two Tree, Dr. Max Mayfield, past Director of The National Hurricane Center, knows the importance of proper tree trimming in preparation for South Florida’s storm season. Recently, as One Two Tree conducted tree trimming at Dr. Mayfield’s home he took pictures of our work in progress so he could post them to his blog, reminding people, it’s best to hire a professional! Please visit Dr. Mayfield’s blog at: http://www.local10.com/mayfieldblog/

We’re barely into our official hurricane season and the activity level is off and running. This season began early when Tropical Storms Alberto and Beryl both developed several days before the official start, the first such occurrence since the 1908 Atlantic hurricane season. Tropical Storm Debby formed on June 23, which was the first time ever that 4 storms formed before July since reliable record keeping began in 1851.

As we approach the 20th anniversary of Hurricane Andrew, I’m reminded of the 8 months of tree related clean-up work that followed. Many people would argue that the force (a category 5), direction and size of Hurricane Andrew was a once-in-a-life-time storm and therefore the degree of associated tree damage was also rare.

The problem with that argument is, little more than 6 years ago we encountered Hurricanes Katrina and Wilma, categories 1 and 2 respectively, as they passed over Miami. They left in their wake a solid 6 months of tree related clean-up. “One thing remembered by people who have experienced hurricanes are the downed trees”, said Max Mayfield, the former director of The National Hurricane Center. Mayfield went on to say, “I’m not comfortable handling a chain saw, so I hire professionals”.

The severity of damage to trees as a result of strong winds has as much to do with an individual tree’s condition as it does with the strength of the wind it is subjected to. When a tree is properly and professionally trimmed for wind exposure the degree of damage is dramatically reduced. The “art” of preparing a tree for such conditions is not something that just any tree trimmer is familiar with, although many think they are.

Most trees have similar needs with regard to “maintenance” trimming but many South Florida trees have unique trimming needs when being prepared for our storm season.
The general objective is obvious, trim the tree in a manner that allows wind to blow through a tree with as little resistance as possible, while still maintaining the overall natural growth habit of the tree. That process is much easier said than done.

A professional trimmer who has experienced the results of previous storm damage and has had the chance to analyze how and why specific branches broke or why a tree was uprooted learns from that experience and applies his knowledge to subsequent trimming.

Live oak trees and other hardwoods make up a large percentage of our local trees and those that sustained damage following Hurricanes Andrew, Katrina and Wilma were almost exclusively those which did not undergo preparation trimming. Even some of the trees that were trimmed sustained substantial damage because they were not “properly” trimmed.

A classic example is, an inexperienced trimmer may think he is preparing an oak tree by cutting and removing some interior branches and/or shortening some canopy branches, all with the idea it provides a more “open” tree for the wind. What that non-professional doesn’t know is, where the tree had a single branch that he cut may very well result in growing multiple new branches from that cut point, creating even more of a problem than the original single branch posed to begin with.

Which branch is to be cut, how it is cut, where along the branch it is cut are all techniques that distinguishes a professional from the lower priced alternative and inexperienced trimmer.
Trees need proper and professional preparation and should be added to the “To do” list of storm season preparation that canned food, water, batteries and generator supplies comprise.

Certainly preparing your trees for the storm season is more costly than some extra food and water, however, when properly prepared, not only are you addressing liability concerns and reducing risk exposure but also extending the interval between trimming sessions. When trimmed by the lower priced alternative, your trees can very well be in greater need a year later than they were to begin with.

One fact is for certain, the cost of tree preparation is significantly less than the cost of tree clean-up following a storm. Not to mention the cost of repair, replacement and/or clean-up of items (i.e., screen enclosures, automobiles, fences, Etc.) damaged by broken limbs or a fallen tree. Former Director Mayfield, a customer of One Two Tree posted on his Hurricane Blog, “if you do have tree trimming that needs to be done, don’t wait until a hurricane is headed our way to do it. Downed trees or limbs can block roadways, driveways, as well as fall on homes and buildings and, at times, even injure or kill people”.

It’s not too late to add to your To Do list!

This site uses Akismet to reduce spam. Learn how your comment data is processed.