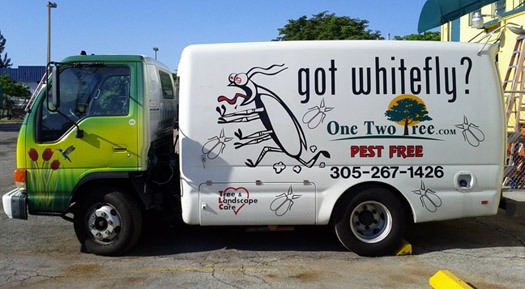 A new whitefly species is defoliating tropical landscapes from plants to stately palms throughout Kendall and other areas of Miami-Dade County.One of 75 species found in Florida, it is identified as the “Gumbo Limbo Spiraling Whitefly” by Catharine Mannion, a specialist at the University of Florida’s Tropical Research and Education Center in Homestead.“These small, winged insects belonging to the Order of Hemiptera [aphids, scales and mealy
bugs] typically feed on the underside of leaves with needle-like mouthparts,” she reported in a recent bulletin.

An ominous warning that concluded: “Whiteflies can seriously injure host plants by sucking nutrients, causing wilting, yellowing, stunting, leaf drop, or even death.”
According to Mannion, the first Miami-Dade whitefly was collected in March 2009 from a Miami-Dade gumbo limbo tree, becoming the first report of the insect in the continental U.S.

“Since the initial find, there were numerous reports in Miami-Dade County, but now it has already spread into other South Florida areas outside Miami-Dade,” Mannion said, emphasizing the “Spiraling Whitefly” species is not the same creature as the “Ficus Whitefly” that causes defoliation and branch dieback of Florida ficus trees.

The extent of the gumbo limbo invasion was estimated to effect up to 120,000 trees in landscaped areas alone in county parks, according to Joe Maguire, the department’s natural areas manager.

Maguire said the whitefly invasion had spread widely in Matheson Hammock where part of its 80 acres has large stands of mahogany and gumbo limbo trees.

“This current gumbo limbo whitefly species is proving much more harmful to a wide range of plants and trees than the ficus tree whitefly in 2009,” Maguire said. “Even then, it proved extremely expensive ($50-$100 per tree) to provide insecticide extermination measures throughout all areas of county parks.”

Without any budget funds available for the new infestation, Maguire said it appears there is “little that can be done for the current infestation other than wait out the natural cycle of survival.”

“We are now finding the insect from as far south as Key West to Broward County,” he said. “As far as I know, the first discovery was along the Miami River. It then spread to Miami Beach, Coral Gables, Coconut Grove and Pinecrest. It began to show up only in gumbo limbo trees, but now it’s spread to different tropical plantings, including palm trees.

“Three of five calls we currently answer ask for inspections and treatment of whitefly infestation,” Flores added. “Treatments involving injections of the Arbor Jet system are the best to save the tree.”

Do-it-yourself chemical applications ($5.95 or $15.95 at a home supply store) are not as effective as injection because any application mix needs careful measurement.

“Homeowners can do more harm than good if they apply the wrong proportions,” Flores said.

His firm has contracted for treatments as high as $2,000 with quarterly re-injections that can run up to $500.

“I am very concerned; have it on my palm trees,” said Martha Backer who led a tree-saving project in West Kendall on SW 104th Street. “Black gunky stuff on the underside, and my avocado trees have had little white specks flying around for over a year since I saw them up by the Hammock’s Police Station.

“Also, you’ll see them up by the gumbo limbo trees lining SW 104th Street. So, yes, we have them in this neck of the woods.”

This site uses Akismet to reduce spam. Learn how your comment data is processed.